Hello, my name is Elsa St Clair and I am 24 years old. My journey of homelessness began in
2017 and has been an ongoing battle since I came to Spokane in January 2020 and landed
at Hope House Women’s Shelter, where I stayed there for 5 months. Afterwards, I was able to
move into my current apartment through a Transitional Housing Program called Bridge. 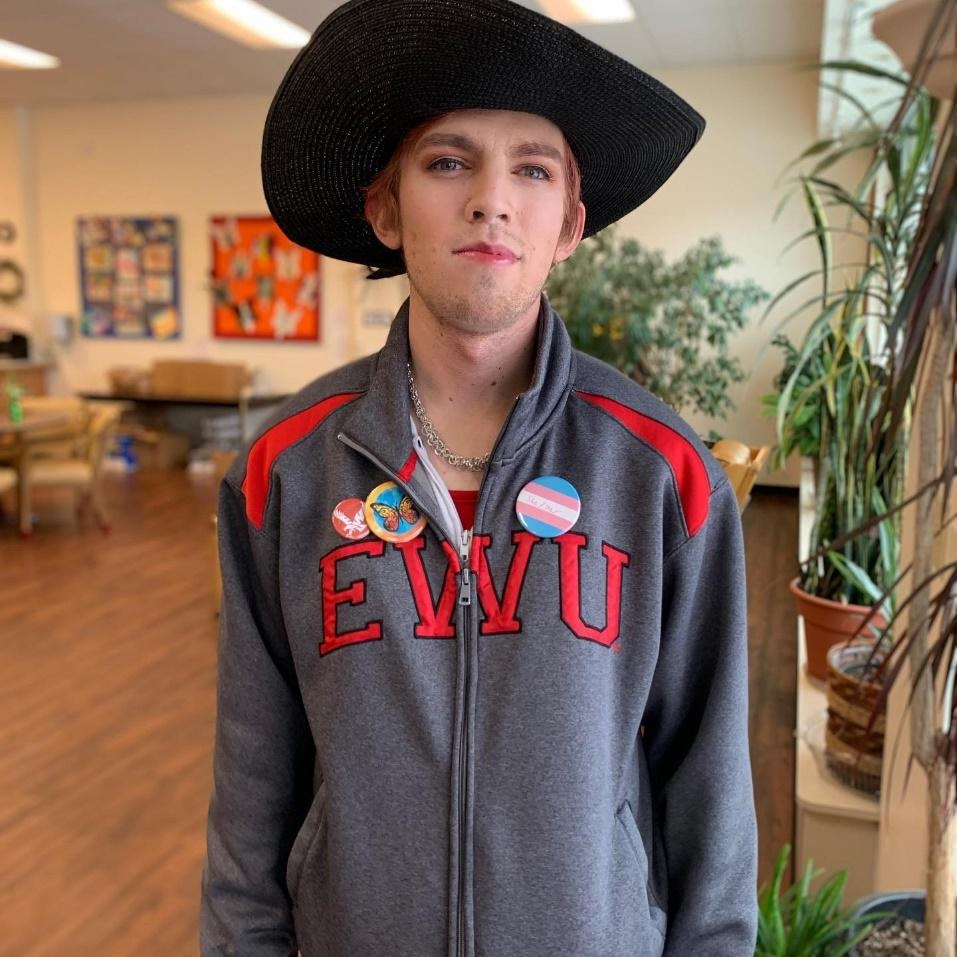 A month into staying at Bridge I was asked if I would be interested in participating in a Spokane Youth Advisory Board (YAB) meeting to share my lived experience with
homeless service providers. I knew right away I was on the path to making some big
changes for youth and young adults experiencing housing instability here in Spokane.

Shortly after I began to attend YAB meetings, I was invited to an Anchor Community Initiative (ACI) Core Team Meeting. I sat in on my first ACI meeting just to listen and learn about what projects they were working on in the city of Spokane. There was a lot of information to absorb.

In the second ACI Core Team meeting I began to share my input and engage with everyone else– showing what I had to offer to help our city. For me, ACI means helping Spokane’s current and future youth and young adults who are struggling. It also means getting to know community members and connecting with them to dismantle barriers preventing youth from having a roof over their heads. ACI has taken the youth voice seriously in implementing changes in the greater Spokane area and I am proud to be a part of the work taking place.

When I wrote about the reasons why I choose to use the word Latinx, for myself and for A Way Home Washington’s organizational voice, I touched on the fact that within the community there are vast differences of opinion on the word. You’ll likely find just as many cases for embracing the word as you’ll find rejections of the word floating out there. For me, one of the strongest reasons to embrace Latinx is to recognize the intersections in our identities.

Last year, I read an interview with Pose actress Mj Rodriguez where she spoke about how as Latinx people we must evolve in our understanding and treatment of the LGBTQ+ community. Watching the season 1 Pose episode where Blanca sees her family for the first time in years made me deeply sad because I felt the scene could have taken place in the 80s (when the show is set) or in 2020. In the rejection of the word Latinx, I see a resistance to recognize and embrace queerness in our community.

As with all issues that disproportionately impact a certain community, we must dig deep into the root causes if we want to solve it. Just like people of color aren’t born predisposed to homelessness, Latinx people aren’t born predisposed to transphobia and homophobia. But we are raised in environments filled with the scars of colonialism and white supremacy, and we internalize narratives that oppress the LGBTQ+ community.

While Latin America is a region filled with people of Indigenous, African, and European roots, many cultural markers that we associate with latinidad today are the vestiges of European colonization. When the Spanish came to our shores, they were dually interested in the continent’s natural riches and in spreading Catholicism. To this day, some Latin American people and Latinx people in the United States point to their religion as the reason they discriminate against the LGBTQ+ community. Even within the past few years, I have seen protests rise in my home country, Panama, opposing the notion that schools should teach children that trans and non-binary folx are part of our community, worthy of respect.

As a pansexual Latina and an advocate to end young and young adult homelessness, untangling the web of beliefs that leads to discrimination within my community matters to me. First, because LGBTQ+ people are part of our Latinx community, and we deserve for our identities to be acknowledged and respected. And second, because when we say that LGBTQ+ young people and young people of color disproportionately experience homelessness, we must recognize that these two identities do not exist separately. Many young people are LGBTQ+ AND people of color, and I want to be part of a culture that cares for them and gives them homes where they can feel safe and loved.

“Con un dedo no se tapa el sol.” You can’t cover the sun with a finger. That’s what my father told me yesterday when I spoke to my parents about my desire to raise Latinx children who grow up knowing that LGBTQ+ folx are part of our community, worthy of respect. I chose to interpret that as a tiny concession in our generational divide, an acknowledgement that hiding the truth from children won’t get us to a better world. After that conversation, I thought about all the other Latinx children who’ve grown up to see that discrimination – whether it’s transphobia, homophobia, anti-Blackness among non-Black Latinx folx – has no place in our culture. That it was not a part of our culture to begin with, but has taken root after centuries of colonialism. We’re out here, talking to our elders, committing even before our children are born that they will feel safe and loved by us as they are. And I am hopeful that together we will be enough to create the culture our future needs.

June is Pride Month! To commemorate the Stonewall riots that took place in late June 1969, each year, across the United States, we join in countless festivities to honor the past. As we are continually reminded, during these revolutionary times, that riots have led to civil rights for marginalized communities, I wanted to turn our attention to the words of Marsha “Pay It No Mind” Johnson. “No pride for some of us without liberation for all of us.” At A Way Home Washington, we are working toward the liberation of LGBTQ+ young people in our system by centering LGBTQ+ data collection in our work to end youth homelessness.

We believe that to end youth homelessness we must end disproportionality within the homelessness system. According to True Colors United 2019 report, we know that 20-40% of youth experiencing homelessness identify as LGBTQ+ although 7-10% of the youth general population identifies as LGBTQ+. Washington is a leader in discussing Sexual Orientation Gender Identity Expression (SOGIE) data collection but, in my humble opinion, it’s time for some implementation. SOGIE data is instrumental in ending youth homelessness for a population that greatly makes up the overall homeless population. With Black Trans Women disproportionally leading most horrible statistics, disproportionately showing up in murder statistics to name the most horrible, how do we equitably serve my community experiencing homelessness?

As I searched for “best practices” in this area, I kept running into a common problem that showed up for communities from San Francisco to New York City. Every community reported that LGBTQ+ folx do not trust systems with their SOGIE data. This is not surprising knowing how historically the HIV/AIDS epidemic ostracized and demonized queer men, specifically, creating a distrust in our medical system. This still plays out today as we saw transgender healthcare protections reversed under our current administration. During my time working in social services, as an employee, I experienced microaggressions around my gender identity and heard discriminatory comments made by staff due to their “misunderstanding” of young people’s sexuality and/or gender identity. Living out loud is not safe in or outside of our systems of care, so why would an LGBTQ+ community member entering homelessness trust us?

The first step is answering that question for yourself, then your agency, and then the broader system that your agency inhabits. We must shift the internal culture of our system, centering equity for LGBTQ+ and young people of color. This looks like interrogating our spaces, interactions, and responses to crisis through an anti-oppression lens. We also must critique what aspects of white dominant culture inhabit the “rules and regulations” that we follow to protect the clients as well as the folx serving them. Of course, there are big policy and legislative shifts, like insurance covering gender affirming surgeries and operations for your Transgender employees, but there are small changes that go a very long way, like making a Pride agency logo for June.

When I think about LGBTQ+ inclusivity, safety, and security within a system I think about the Street Transvestite Action Revolutionaries (STAR) and the STAR House, founded by Marsha P. Johnson and Sylvia Rivera following the historic Stonewall Riots in New York City. Marsha and Sylvia saw that Transgender and Queer homeless youth were not getting their needs met and founded STAR to fill that gap. STAR was the first of its kind, but what would it be like if every youth homelessness shelter already incorporated safety and security for Trans and Queer homeless youth? What would it be like if transitional housing services were more thoughtful of the barriers to employment for Trans individuals? What if we all, in the youth homelessness sector, were so thoughtful and proactive about equity that LGBTQ+ young people felt safe wherever they turned for support? We need to create that system before we start asking folx to trust us with their SOGIE data.