Our Coaching and Improvement Coordinator Isaac explains why our sector cannot sit on the sidelines as our communities fight to end police violence. Please help us elevate community organizers’ demands in Seattle and send a message to Mayor Jenny Durkan calling for less policing and more community-based solutions,

I can’t start writing without acknowledging #GeorgeFloyd and the long list, spanning 400 years of American violence, of Black and Brown folks murdered by the state. The murder of Black and Brown folks by the state has been embedded in the history of the United States. As a Black person living in this country, I still struggle with finding ways to talk about this history and our current times like it’s not my own.

These murders are a reminder that this world does not see me as equal due to the color of my skin. I remember the words of James Baldwin, that “to be a Negro in this country and to be relatively conscious is to be in a rage almost all the time.” My mother and grandparents made sure to keep me conscious, and suspicious, of the state at a young age. Even as they held positions in systems they called corrupt, we survived on truth, transparency, and the knowledge that things could be better.

Black and Brown families, youth and adults, keep disproportionally falling through the cracks of public services due to racial discrimination and/or bias within these systems. This struggle of calling for our “systems of care” to care for everyone has been carried for centuries by Black and Brown revolutionaries, but it’s not just my problem, or Black and Brown people’s problem. It is a problem for our whole society to solve. 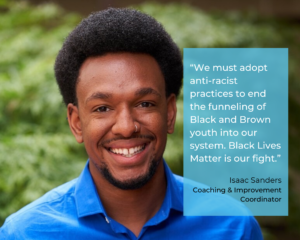 George Floyd’s daughter recently was recorded saying her daddy changed the world. I imagine that Martin Luther King Jr’s kids, Malcolm X’s kids, and many other revolutionaries’ children felt the same. But what about the folks that are not elevated in the news? What happens to their kids? Our work is to make sure that they do not end up in homelessness. That they do not get exited from any program into homelessness. That they feel safe and secure in a world that historically has not protected them due to their skin tone. We need to stand with justice, and not the system that calls itself justice currently. The kind that is demanding that things change for the better. For all of us.

This site uses Akismet to reduce spam. Learn how your comment data is processed.